The Australian Cattle Dog is *NOT* the same thing as an Australian Shepherd !!

The breed was developed in the mid-to-late 1800's in Australia where the stockmen were desperately in need of a dog that had the stamina to withstand the rigors of the harsh conditions in their country. While there is great controversy over the breeds actually used in the development of the ACD we know today, some of the breeds reported to have been used are: the Native Australian Dog (Dingo), Smooth Haired Scotch Merle Collies (reported to be a cross between the Rough Haired Scotch Collie and the Blue Italian Greyhound), the Dalmatian, the Bull Terrier and the Australian Kelpie. All fanciers of the breed have their theories and all are as stubborn as the breed in insisting that THEIR theory is the correct one.

The Australian Cattle Dog is a relatively hearty, healthy breed that has an average lifespan of twelve to fifteen years. They are a medium sized muscular dog that stands 17 to 20 inches (43 to 51 cm.) at the withers (shoulders). Their weight range is variant around their general build but on average falls between 30 and 50 pounds (14 to 23 kg). The Australian Cattle Dog comes in two colors: Blue or Red.

Australian Cattle Dogs are born white with whatever face and/or body patches they will have in later life. As ACD pups age, their blue or red coloring gradually emerges. The correct Australian Cattle Dog coat is what is known as a "double coat". The short, straight outer coat is protective in nature, keeping the elements from the ACDs skin while the undercoat is short, kinky and dense. Australian Cattle Dogs are not year-round shedders, instead they "blow" their coat once a year (sometimes twice in the case of intact females) just before the summer months. While the week or two an ACD is blowing his or her coat can lead to hair everywhere, many people find it preferable to constant shedding.

While in America and Australia, many ranchers dock the tails of Australian Cattle Dogs, to do so is an INCREDIBLE disservice to the breed.

Just watching an ACD at work shows one how much they rely on their tails to act as "rudders" as they quickly manuever around the livestock. Such quick maneuvers have also been known to be important when chasing tennis balls (VBG).

The Australian Cattle Dog personality is often reserved with strangers and even FIERCELY protective when they perceive that their property and/or persons are being threatened. The ACD is intelligent, but can certainly often be described as hard-headed and stubborn. Once an ACD has befriended you, they are a friend for life....but that friendship must often be earned. Australian Cattle Dog are often refered to by 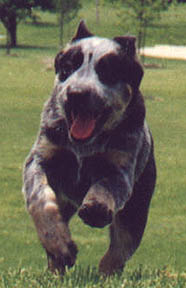 their owners as "velcro" or "shadow" dogs...because wherever you go, there they are!!

- With thanks to australiancattledog.com and especially to the first people to breed Australian Cattledogs in Belgium whilst taking care that te breed is and stays healthy and strong :

Karel : “ Opposite to my wife Jeannique, I’ve always had dogs at home, even as a very small child.  When I met my (future) wife in 1984, her first priority was to be with someone who loved dogs. As we were married in 1987 and left our familyhomes, I took my dogs with me, namely a German Braque and a crossbreed ‘Shepherd from Mechelen’.

Soon we had a Bouvier des Flandres, his name was PUNJAAP (this name was the origin of our later name of kennel : DES POENJAAP).

My wife had bought this dog in order to do sports such as IPO and obediencetraining, as later on also police/guarddog.

In 1990 we bought our first showdogs and we started showing in the Benelux and Germany and in 1994 also with the “longdistanceshows” in Europe, but also in the USA and in Canada.

Today we are active in over 28 countries.

Because of the upcoming prohibition of docking tails and ears in Europe, we started looking for a new breed ; it simply had to be a shepherdsdog GR1 and as such my wife found the Australian Cattledog.

Our first Cattledog was imported from Canada, but soon we would also be importing from Finland and the USA.

It was an enormous change from the Bouviers we had, even though both breeds were being bred for the same work : herding cattle.

The outside appearance is totally different from Bouviers, whose fur needs to be trimmed regularly ; the Cattledog has a shorter fur and doesn’t need trimming.

The Cattledog is smaller than a Bouvier, and has a different character. They still have all the natural features in them.

Herding cattle is a big part of their nature, when you go on a walk with a group of people, the Cattledog will try and keep the group together, “herd” the group and also the “heeling” is typical.

Raising a cattledog is no more difficult than raising any other dog, but you need to make sure that you can spend a lot of time with your Cattledog.  They thrive on the attention of their owner.  They adore playing fetch and everything that has to do with water. Most Cattledoglovers train agility or obedience with their dogs.  Also in the Country & Western surroundings, they are the most seen breed, they are very popular with horselovers and they are very good in herding horses !

Last but not least, they are the most loving, faithfull companions for their owners and their family, they simply love going for a walk with “their people”. They are simply adorable !